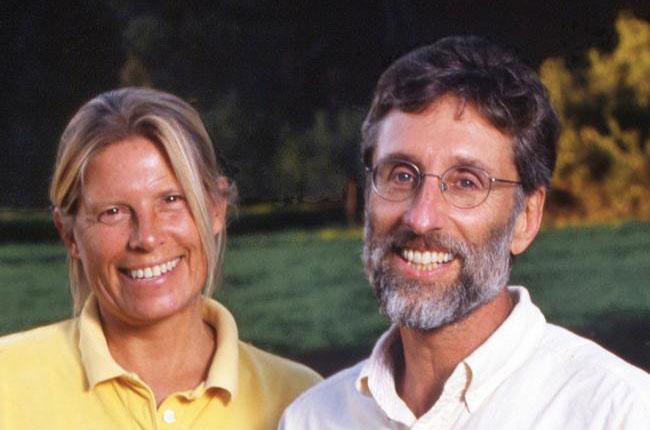 With no family background in the business, he and his wife, Sandra Belin, have built a thriving growing, packing and shipping operation with production facilities and fields in California and Mexico, and packing and shipping warehouses in San Francisco, Los Angeles and Boston. He can be proud of his successful Del Cabo tomato products and his firm is clearly one of the leading producers and shippers of culinary herbs in the United States. He can also be proud of his organic and sustainable production methods which have created a firm that clearly lives by its own motto of “Healthy Soils, Healthy Plants, Healthy People.” By all measures Larry Jacobs is a success and his business is thriving.

To understand Larry Jacobs and the goals of his company, it is probably best to go back to the events in his life that shaped his outlook and sent him down the path to the produce industry career that he now enjoys.

He grew up in the San Fernando Valley when it was still home to farms, chicken ranches and dairies in the 1950s and early 1960s. He walked to school through those farms and the many citrus groves scattered throughout the valley. This gave him an appreciation for that type of life and probably led to his first career as the owner of a wholesale nursery in the area. At the time, he was 19 years old and had decided that going to the University of California at Santa Barbara wasn’t his thing.

“Looking back, I didn’t know what I was doing but I thought I did,” he says of the nursery business. “I sold a lot of pine trees and citrus trees and other specimens.”

Jacobs, who was always an avid reader, started learning about beneficial insects and other approaches to solve his aphid problem. When the inspector returned and saw the aphid control he had achieved without chemicals, he urged the young nursery grower to take a PCA (pest control advisor) class that he was teaching at the local junior college.

Over the next several years, he graduated from Cal Poly, studied organic farming at Washington State University and worked on a farm in New England, where me met his future wife. But it was a job in Guatemala that got him truly interested in owning his own farm. In that Central American country, he helped set up a soil testing lab and began working with small farmers teaching them how to use the soil to farm in the most beneficial way. He stayed in Guatemala for several years, along with his future wife, working with these growers, but knowing he didn’t really have his own hands-on experience. He knew about soil and farming techniques but he hadn’t farmed himself.

In 1981, Larry and Sandra moved to San Mateo County and bought a little land and began growing some crops. “We grew what everyone else did which was some fava beans and peas and a few other things. At the time I did realize that I wanted to distinguish myself from the other growers in the area so we put in five acres of elephant garlic, which is very versatile.”

With the garlic maturing, the company was able to sell Orchard Hardware Supply on the idea of carrying it in their many stores, which gave Jacobs Farm a big boost and set it on the path toward prosperity. Soon thereafter, an encounter with a local chef caused the company to plant some culinary herbs. Over the next several years, the company expanded its culinary herb program and it has since grown to a 300 acre farm with 30 greenhouses. Today culinary herbs are the focus of Jacobs Farm, with the owner reluctantly admitting that it is one of the largest operations of its kind in the United States.

Today, the company grows 60 different varieties of herbs and sells them all over the country under the Jacobs Farm label.

In 1985, Larry and Sandra, with their firm still in its relatively early stages, had the opportunity to take a vacation during the winter months. They headed down to Cabo San Lucas and were meandering in the countryside looking at some of the local farms as they were apt to do. At the time they were talking to some officials and began exploring the concept of working with local growers to improve their quality of life while providing Jacobs Farm with some winter crops to sell. One thing led to another and before long, Del Cabo was established with eight local families who were farming at the southern tip of the Baja peninsula.

For the past two years, the company has devoted scores of acres to its employees and it now grows many different vegetable crops with the resulting harvest given to its employees free of charge. To provide employees off site with the free crops, the firm regularly ships a pallet or two of the product to those off site locations.

Larry Jacobs also is currently working with a young man who wants to duplicate the firm’s Del Cabo experience in South America. He said it is a good model and there is no reason it won’t work in Peru, Chile and other countries.