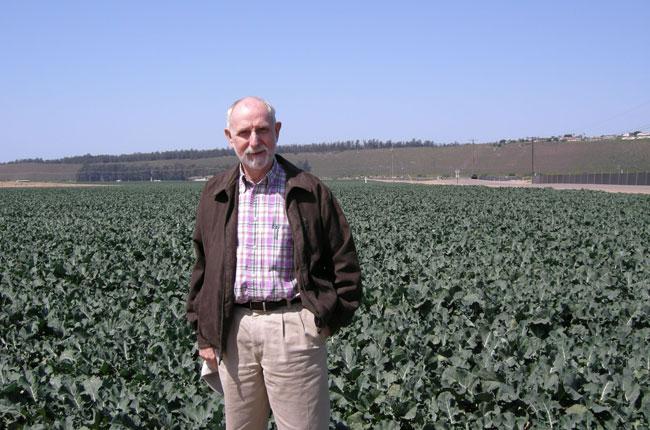 San Ysidro Farms, Inc.
“You’ve got to live it up, every day!”
Guadalupe, CA
Family:

John Maulhardt is doing a very good job living up to his father’s maxim. He and his wife of 36 years, Fredene, traveled to Vietnam a few months ago where Fredene had worked as a stewardess for World Airways flying military flights during the Vietnam War. This month, they are going down to Nicaragua to do some charitable work (they have supported a family there for many years), and maybe a little surfing near property they have on the Pacific side of the country. Sailing is another passion and they keep a 35-foot sailboat in Santa Barbara harbor. John also would like to return to Argentina where there are “good wines, good weather and great people.”

One of the great people in the Maulhardt family history was his grandfather, Gus, who came over from Germany to the United States in 1909. Gus Maulhardt was a banker by trade and went to work in Los Angeles for the Bank of California. When World War I broke out, there was a “tremendous amount of anti-German sentiment,” says John. But instead of firing young Gus, he was re-assigned to the bank’s branch office on Seventh Street next to the Los Angeles wholesale produce terminal often referred to as the Seventh Street Market. The bank branch on Seventh Street had been operating unprofitably and was slated to be closed, thereby solving the problem of what to do with Gus. That move proved to be fortuitous instead of ruinous for the German immigrant as Gus Maulhardt proceeded to “go and get all the produce businesses in town” for the bank branch. Gus was never “let go” and ended up becoming one of the bank’s five vice presidents and the premier produce banker in the United States and Mexico.

Young John Maulhardt was working for the Ventura Star Free Press in the early ‘70s. He had earned both a bachelor’s degree and an MBA from Santa Clara University.

“My dad wanted me to come back in the produce business,” says John, “and I wasn’t making a whole lot of money at the newspaper.”

Eventually, John became the manager of H.H. Maulhardt Packing, and in 1983, formed San Ysidro Farms with his partner, Roy E. Kilgore. In 1988, they became minority partners in Apio Inc., which was sold to a public company, Landec, in 1996. Meanwhile, San Ysidro Farms continued to grow and in 1999, John and Roy started Beachside Produce - an integrated vegetable cooling and shipping concern with seven other growers. “We are the largest volume shipper for Beachside,” says John.

John embraces his father’s motto living every day to its fullest – as a businessman, Christian, surfer, pilot, sailor, father, husband, and grandfather. John and Fredene have three children, two grandchildren, and another grandchild on-the-way. He is on the board of his church in San Luis Obispo, Old Mission Catholic Church, and serves as a member of the board of trustees of Western Growers Assurance Trust.

“We have our struggles,” says John, who is involved with water quality issues in the Central Coast, “but I would say the outlook for Santa Maria is quite positive, even robust. We are blessed with good water, and good soil.”