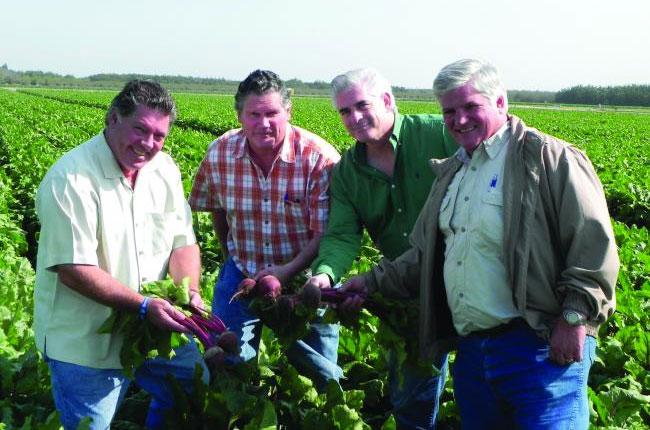 Ratto Bros.
"We were in our late 20s and 30s and were very enthusiastic about building up the company. We wanted to grow some more acreage and as always the most important thing we had to ask ourselves is could we sell it all if we grew it. That’s always the first question. What we thought we could do, we could do. It worked!"
Modesto, CA
Family:

It is a family farming operation that appears to be a model for success; though the model is based on intuitive good sense rather than a corporate structure or a set of rules.

Sure the company’s management team has titles, but they are in a closet somewhere probably brought out as often as the coat and tie. They also have a corporate structure, a board and board meetings, yet you get the sense that decisions are never made far from the dirt that they say gives them a bit of a competitive advantage.

They have all the latest technology and advancements, including a high tech cooling and packaging facility, state-of-the-art irrigation pumping and filtration stations, an on-site solar installation, a well-staffed food safety team, and an in-house computer programmer that can track the dozens of specialty-type vegetables crops the firm grows on its 1,000 acres on a continual, rotating and year-round basis.

But it is the clearly the more than 45 crops being grown in three or four row blocks in many different stages of growth on 10 different ranches in a former San Joaquin Valley flood plain that gives this company its passion.

Ron Ratto is the company president. Born in 1951, he got a degree in agriculture from the University of California at Berkeley. “I grew up in the family business and so after I graduated I did talk to my uncles about joining the company. I thought I would give it a try before I went elsewhere and they were willing to put me to work.” He enjoyed the work and made a career of it. Ron added that, like his partner cousins, he grew up around his grandfather and seemingly caught the farming bug from him. As president today, he runs the administrative side of the business and is also involved in the production end. His expertise is far-ranging and easily switches from discussions involving food safety, labor, operations and management issues.

Ray Ratto went to Cal Poly San Luis Obispo and was also an ag major. He grew up on the family farm in Alameda (near the airport) and figured it would be his occupation. Like Ron, who is one year older, Ray has fond memories of his youth as part of a farm family. He worked in sales for the firm for a couple of summers while in college, but is clearly more comfortable in the growing end of the business. He walks the company’s fields everyday and on a tour of the farm, he knew every pothole on every ranch road. Ray loves looking at his plants be they swiss chard, kale, beets, leaf lettuces or the many herbs the company farms. He notes the beautiful growth and is disappointed when he sees some weaker specimens. It takes a computer to keep track of the many crops on each ranch, but one suspects that Ray has the schematic in his head as well.

David, who is Ray’s brother and three years his junior, didn’t take such a direct route to the family business. He went to UC Davis and got a degree in city planning. His first career was as a real estate developer. As the generation above him aged and needed some help, David agreed “to step up and do the marketing” for the firm. He first worked out of Oakland but in the 1990s, he moved to Ripon, which is also north of Modesto and near the ranch, to jump in to the operation hook, line and sinker. Today, he is the company’s vice president of sales.

Frank took the most circuitous route to the family business. Son of Lenny, he moved over to Modesto when he was only three years old and the company bought its first valley ranch. Frank readily admits that he didn’t like the farm life and was ready to move away as soon as he could. He went to college at San Diego State University and earned a degree in business marketing, though he went to the school with the hopes of making its baseball team. Unfortunately, he was in the same class as future hall of famer Tony Gwynn so it didn’t take David long to figure out baseball might not be his sport. “I joined the lacrosse team and played for them for the next two years,” he quipped.

After graduation he worked in various fields in sales, but much of the time he was selling medical equipment and devices. In the early 1990s, he moved back to Modesto to help out with his mother who still lived in the family home. About this time, cousin David began working on Frank to join the company’s sales team. In fact, David said part of the agreement of moving back to the Modesto was the addition of Frank to the team. Frank said joining the company was a bit of a “cultural shock”, especially the concept of sitting at a sales desk all day long. His previous position in the medical field involved outside sales and lots of travel. But today he appears very content and like the other senior management members, his enthusiasm for what he does is evident.

The four partners are hard pressed to nail down their exact management style. Ron says it is a collaborative effort but just as quickly he adds, “We are the senior management but we have other managers involved who each have their own expertise and have responsibility to make decisions in their area.”

He said the company has an organizational structure and charts but that is not the key to success. He and his cousins, Ron says, communicate often to discuss the day to day issues but individual responsibility is a very important management tool.

Frank can’t remember any serious disagreements and reiterates that each member of the team’s management takes responsibility for their own area of expertise.

Ray adds that everyone works for the common good and no one has any hidden agendas.