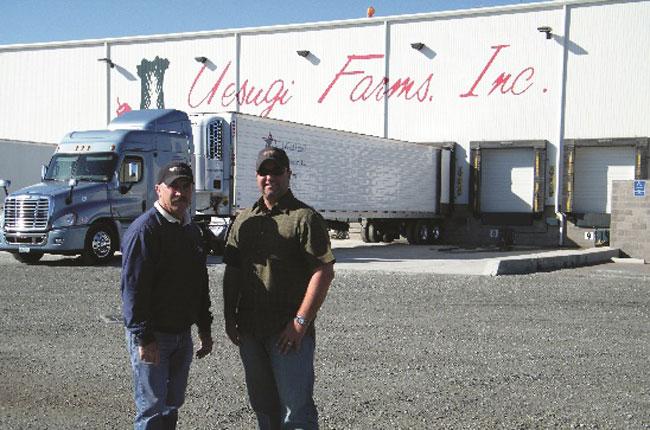 “If you love what you do and have a passion for it, you will be successful!“
Family:

Joe Aiello has had a good run at farming and he is still running the operation, but he is very happy to have relinquished control over some of the management operations. “My son Peter is taking over many of the management functions, and that’s great. The great thing is that I haven’t turned them over to him, he has taken them away, which is what I like. That’s the way it has to happen.”

Joe admits to being old school and says his UC Davis-educated son has a more modern approach that will serve the company well as it moves into its next phase.

“I think California has a bright future in farming. All of us farmers (of my generation) are used to operating with a pretty free hand. We didn’t have half the regulations that there are today. Right now that are millions of regulations that we have to deal with that I never had to deal with before. Of course, you can put a negative slant on that -- and I agree that we are over-regulated – but it is the reality and you just have to deal with it or get out. I’m optimistic about the future. It’s like anything, if you love what you do and have a passion for it, you will be successful! I think food production in California is going to become even more important than it is today. I believe in it. This is a good business to be in.”

Joe Aiello grew up in Campbell, Calif., in the heart of the Silicon Valley before there was such a thing. “I was born in 1947 when they used to call the Santa Clara Valley ‘the fruit bowl of the world.’ The area produced apricots, peaches, prunes…a lot of different fruits. In the ‘50s, there were 13 canneries in the Santa Clara Valley. I did not grow up in a farming family, but my dad was a trucker and he did haul fruit to the canneries so I was aware of agriculture.”

Though his family was never in the farming business, soon after graduating from high school, Joe found himself working on a farm.

The work appealed to him and Aiello worked on farms throughout the summers while he attended junior college. And he liked it so much that he decided to go Cal Poly San Luis Obispo and major in crop science.

After graduating from college in 1971, Aiello started farming on his own in Morgan Hill. He started with a small 16 to 18 acre farm growing sweet corn. “I was married by then (to wife Katy) and I thought I’d just till the earth and have the best time of my life.”

In fact, things worked out for awhile. Over the next five years, Joe and his wife grew the farm to more than 100 acres. Life was good and he was becoming a pretty good farmer. In 1976, he secured a contract to grow processing tomatoes and he thought it couldn’t get much better. “Everyone told me to grow early season varieties and so that’s what we did. But on August 20th, we were hit with two inches of rain and I lost the whole crop. In fact, I lost about everything we had.”

In these early years of his in-the-field experience, Joe met George Uesugi a local grower that was making a good living with labor intensive crops such as strawberries, chili peppers and Chinese cabbage on about 130 acres of land in the Gilroy/Morgan Hill area. “George wasn’t in good health and he was not married, nor did he have any kids. He asked me if I’d come join him and help him out in his operation and he had a house for me to live in. Katy took one look at the house and said, ‘No way!’

Instead, Joe Aiello became a foreman for the Newhall Land & Farming Company managing 7,000 acres of land from January 1, 1977 to March of 1979.But he kept in touch with Mr. Uesugi and in 1979, the veteran farmer made Joe Aiello a deal he couldn’t turn down. “He financed us for the first year and then sold us the business. It turned out to be a great opportunity. Here we are 30 years later.”

Over the years, Joe Aiello has obviously made Uesugi Farms his own. Today the firm grows crops in a half a dozen different districts in California and Mexico. The firm is very big in both the fresh bell pepper category and the processed chili pepper arena. They also grow strawberries and other crops.

But through it all, he has kept the name of the original founder on the banner.

“We’ve kept it as a tribute to George and all he did for us. Without him, it wouldn’t have happened. We’re still really good friends. He’s a great guy. “