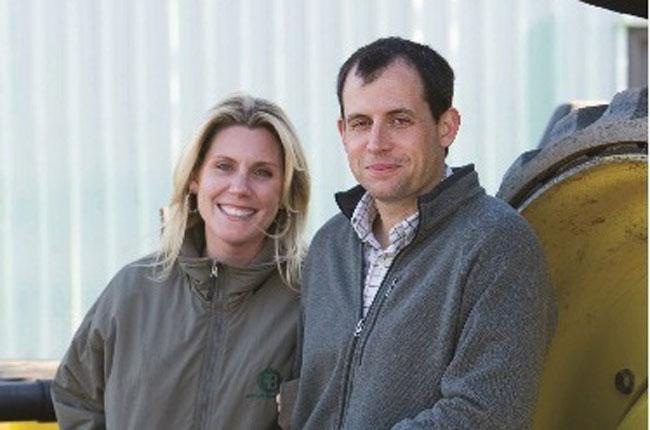 Bowles Farming Co.
“If I am going to do the AG thing, I’m going to do it and really embrace it.”
Los Banos, CA
Family:

That pride for his family farm runs deep. His great, great grandfather came over from Germany in the 1850s. Michael worked in commercial real estate in Atlanta, Ga., for five years but came back to the farm after his great uncle was diagnosed with a terminal illness. Though he worked in irrigation on the farm and driving tractors in his teens, he didn’t consider himself an ag guy.

“It was definitely a shock getting back to the farm,” Michael said. “Nobody said you have to come back and help.”

He didn’t start at the top. The commercial real estate professional-turned-farmer started running the farm’s spray program and the tractors. He even worked the night shift a few seasons, learning things from the ground level. He was promoted to management in 2002 as the vice president of business operations.

“It’s been good to come to ag from a different perspective in a way,” Michael said. He’s not only brought in new technologies such as GPS and drip irrigation, he also brings in his own global perspective.

Just as Michael has a wider view of agriculture through both production crops and fresh produce, he also doesn’t have a limited view of the world. In October, he was just getting back from a goodwill tour of visiting cotton merchants in Bangladesh, Indonesia, and Vietnam. Michael was taken aback by the poverty he saw, but also was impressed by the textile factory workers’ painstaking labor. He witnessed firsthand how designer jeans are finished by hand—made from California cotton—for just the right touch.

While he was in Vietnam, officials were debating an increase in the minimum wage from $75 to $100 per month.

“We’ve been so far removed from food shortages,” he said. His wife’s aunt brought over an exchange student from Russia. “I drove her to Los Banos and we walked into Save Mart and she about hit the ground, not even believing the amount of fruit and meat and bread … and the selection.”

Cannon Michael doesn’t like to be labeled. As a sixth generation farmer, he’s philosophically against silos. And you can see why. His farm, Bowles Farming Co. in Los Banos, Calif., grows cotton, wheat, processing tomatoes, fresh market tomatoes, fresh market onions and cantaloupes. He grows both production crops and fresh produce, and he’ll take every opportunity to bust myths and negative public perceptions associated with labels such as “corporate agriculture” or “agribusiness.”

“So many people compartmentalize people in agriculture—you’re either a production crop farmer or you’re growing these wonderful vegetables,” Michael said. “There’s no way to really compartmentalize ag.”

“There’s a lot of advantages to being a big company in agriculture and a lot of things that people don’t necessarily understand that we can provide that don’t get provided by maybe some smaller companies,” he said.

For example, his family farm provides health care for workers and has a defined-benefit pension plan.